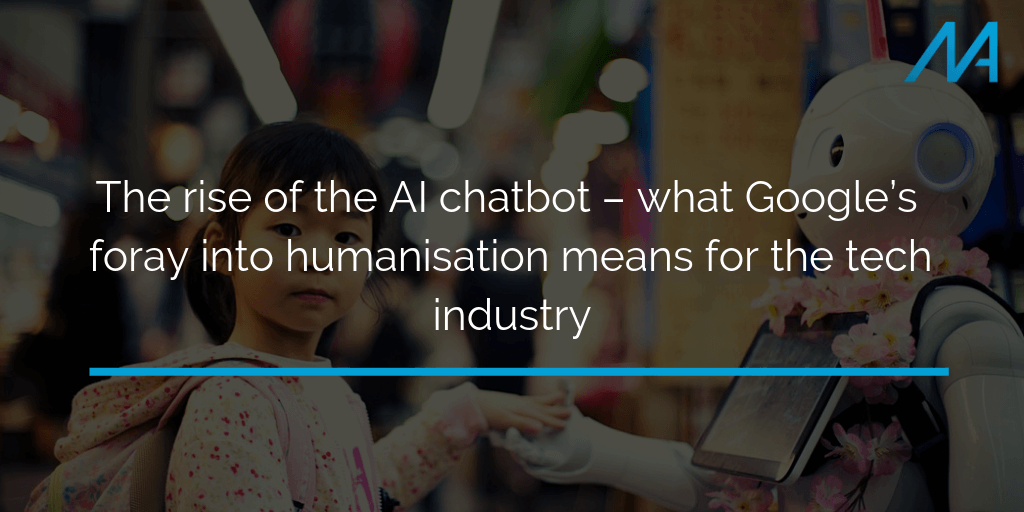 For anyone keeping an eye on the news for robots, chatbots, AI and big data are dominating the headlines for various reasons. From Erica and Sophia, the world’s most lifelike robots, to chatbots in law, it’s clear that technology is dominating the news cycle at ever-increasing rates.

Google, as is their prerogative, has now one-upped the rest of the world in their drive towards a ‘humanised’ robot. In a move that left the wider world with some level of concern, Google has now unveiled the Google Duplex – the tech behind a new feature for the Google Assistant.

Live at the I/O 2018 event, a festival for developers to come together for the latest developments, Google demonstrated a live call placed by the Assistant to a hair salon. The robot ‘ummed’, ‘aahed’ and ‘mmhmmmed’ its way to being seen as a genuine call to book an appointment – to such an extent that the other person on the call had no idea they were speaking to a robot.

Announcing the launch, Google’s CEO Sundar Pichai confirmed: “The technology is directed towards completing specific tasks, such as scheduling certain types of appointments. For such tasks, the system makes the conversational experience as natural as possible, allowing people to speak normally, like they would to another person, without having to adapt to a machine.”

According to their blog post providing further detail about the offering: “The system has a self-monitoring capability, which allows it to recognize the tasks it cannot complete autonomously (e.g., scheduling an unusually complex appointment). In these cases, it signals to a human operator, who can complete the task.”

While this development is sat firmly in the consumer realm, it’s a well-known phenomenon that business takes the lead from its more consumer focussed counterparts.

What’s clear, however, is that chatbots are no longer just a gimmick. So, what does this mean for the tech sector?

The impact this is set to have on the tech industry is starkly similar to the impact other AI-based systems will have. In essence, it will remove the need for humans to repetitive tasks, meaning that one person can do the job, using the chatbot tool, of five people… but it will only do so for industries that have yet to be disrupted.

Forms, appointments and even orders are now filled in online as standard. Ask any millennial, and they’ll admit the concept of making a phone call will result in a fight or flight response… the tech industry reflects this.

The potential of chatbots such as Google’s Duplex will be revealed only through widespread adoption. Should two parties both be using this system, businesspeople could use the software to compare free time in calendars and arrange for things autonomously.

In real terms, the rise of chatbots will result in a vastly increased demand for technological skills – coding in particular. Beyond this, we’ll see a significant resurgence in the demand for soft skills – interactions that cannot be undertaken by robots.

Human to human interaction cannot be taken over by AI, there are things which humans will always be needed to do. AI and robots can, however, speed up processes by executing routine work like making appointments, ordering stock, or organising calendars.

One thing’s for sure – we’ve come a long way from Cleverbot.