The (fourth) revolution has only just begun 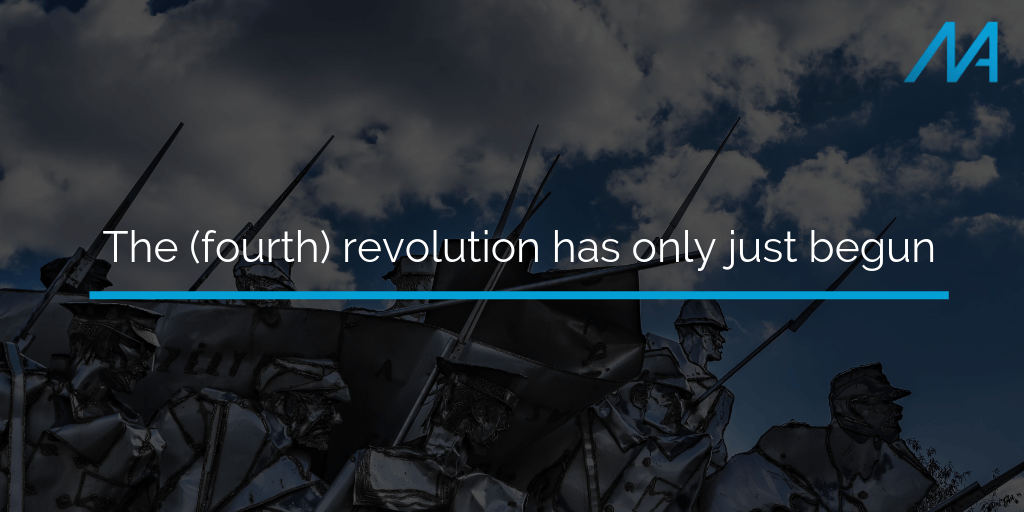 Some refer to it as 4IR or Industry 4.0, others simply call it the Fourth Industrial Revolution. Whatever your preference, compared to previous industrial revolutions, this one is evolving at a rate, scale and scope that surpasses all that have gone before it and it shows no sign of slowing down. But what is it exactly?

Winston Churchill’s quote perhaps sums it up best: “To improve is to change, so to be perfect is to have changed often”. His words, uttered more than half a century ago, describe succinctly what the fourth industrial revolution is all about – change, or put another way, disruption.

Coined by the World Economic Forum, the fourth industrial revolution is being driven by three key developments – data, cloud and analytics. Each of these is transformative in its own right, but as a collective they have the potential to radically change the way in which business transactions are conducted.

The critical enabler in all of this is cloud technology – the means by which organisations can unlock the potential of these disruptive technologies.

Indeed, in a recent interview, Ralph Haupter, president of Microsoft Asia, said: “Today, anyone with a credit card can simply sign up for cloud resources….[This] has shaped how companies consume and operate these resources”.

According to a recent report, organisations are saving 14% of their annual budgets by adopting cloud-based services with the cloud market itself predicted to be worth $92 billion USD by 2020 – up from $33 billion in 2016.

So it is not surprising to learn that the process of IT modernisation has now found its way to the very top of the organisational agenda. This is especially the case within the financial services, manufacturing and retail sectors where the likes Microsoft’s new SaaS solution, Dynamics 365 is making some serious inroads.

By bringing together the best of the CRM and ERP cloud offerings into one cloud service, Dynamics 365 is proving to be a real game-changer and one major beneficiary over the last 12 months has been global facilities management giant, Sodexo.

Sodexo replaced a series of standalone and siloed computing systems with Microsoft’s Azure and Dynamics 365 platforms in a bid to streamline operations and maximise efficiencies.

According to a recent press release, one client was able to “replace 600 separate contractors with a single integrated and highly efficient service”, while another reported annual savings of $75m (Australian).

While these are certainly impressive figures, the move towards scalable and flexible cloud-based solutions is not exclusive to larger organisations. Small to medium sized businesses are also taking advantage of the platforms’ ability to support more workloads, offer bottomless capacity and achieve greater efficiencies.

This is also having a significant influence on jobs within the IT sector as a whole, with demand for those with CRM capabilities being highly sought after. For instance, roles such as MS CRM Consultants, MS CRM Support staff and Functional Consultants will be of particular interest to organisations over the next 12 months and beyond.

The technology industry has prophesied the coming of a fourth industrial revolution for some time and it would seem that its time has come.

But while we have already seen some outstanding successes from those organisations that have embraced the opportunities presented by the likes of SaaS solution, Dynamics 365 and SharePoint 2016, it is also clear that the real impact of the fourth industrial revolution has yet to be realized.

It is an exciting time for all involved and the possibilities seem endless. It may be too early to predict with any real certainty what impact the fourth industrial revolution will have, but one thing is clear – the speed of current breakthroughs that are disrupting almost every sector in every country will have an effect on all of us.