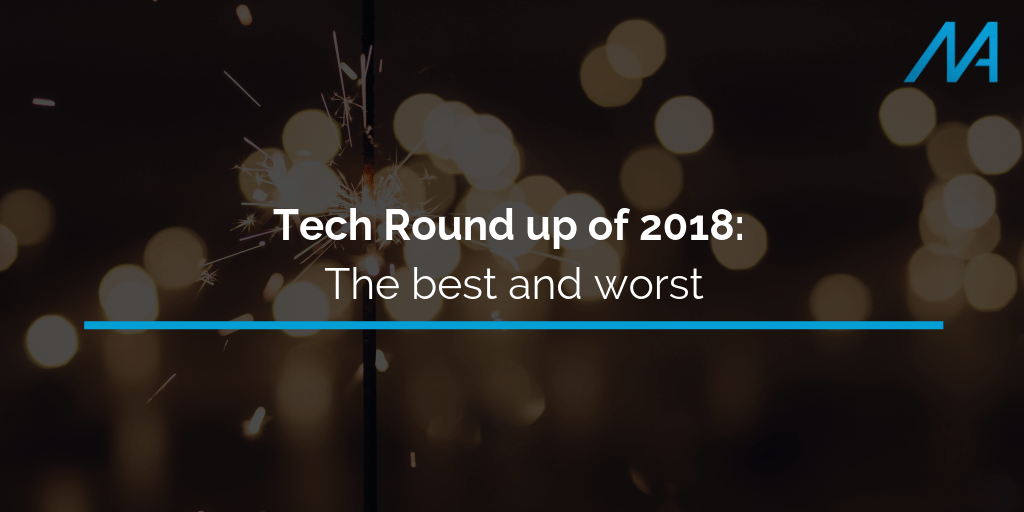 The new year is here and with that comes awards season! Highlighting the best and worst of tech in the past year, we take a look at some of the champions and casualties of 2018.

After much anticipation and delay, Amazon opened their first cashierless supermarket this year in Seattle. Now at a total of eight stores, with plans for world domination in their sights, Amazon’s concept of a convenience store in which customers can simply walk in, take what they want and leave again is at the cutting edge of AI and machine learning. As Microsoft teams up with the biggest supermarket in the US to compete with Amazon Go, it seems Just Walk Out technology could be the future of grocery shopping.

It’s been a tough year for Uber. They’ve faced fines for failing to report data breaches, been banned in cities around the world and have haemmoraged cash, despite bringing in billions. It’s thought to be their self-driving cars which are putting the strain on financial resources and in March reputation took a hit when a woman in Arizona was killed by one of their autonomous vehicles. It doesn’t look as though Uber are set to fade in 2019, but let’s hope they have a better year ahead of them.

Our employees speak more than 14 different languages between them, so we were very excited when these earbuds, which translate foreign language in real time, were introduced. While they aren’t the first product of their type, they are certainly the best, allowing the sound to be split between earbuds, so both people can have access to sound and microphone simultaneously.

Yes, we’re naming the entire retail industry as the worst innovators of 2018. The landscape of the retail sector has been changing for years, mainly due to disruption from online distributors. Despite the ongoing battle, retailers don’t seem to do anything different or proactive to survive the competition. The saving grace should have been ASOS, who introduced voice-powered shopping in October, but despite their steps towards technological innovation they reported a profit warning in December. Innovation for innovation’s sake isn’t enough, but it’s clear that the retail industry has a way to go.

Ok, so IR35 isn’t here yet, at least in the private sector – but it was officially announced in the autumn budget that IR35 will begin to affect businesses in the private sector from April 2020. We’ve already seen a drop in productivity in the public sector lose, as well as workers losing up to 25% of their take home pay, so it’s not difficult to see why few are excited about the extension of this legislation into the private sector. At the very least, there will be a two year consultation period before IR35 is adopted, allowing businesses the chance to have their concerns considered.

The Tech Titans have had their share of scandals this year with everyone from Jeff Bezos to Mark Zuckerberg emerging from 2018 having survived various hits to their characters. In the midst of all that, Bill Gates continues to build a strong reputation as a reliable and innovative business leader. While he is no longer the CEO of Microsoft, he remains very much the face of the company and his social media presence and charitable efforts continue to strengthen both Gates’ and Microsoft’s standing.

Elon Musk could do with paying more attention to Bill Gates’ social media. While the Microsoft founder manages to present a professional image, Musk has tweeted several ill-advised statements in the past year, seemingly viewing himself as above reproach. Unfortunately, the rest of the world is less enamoured with his view of himself as a tortured genius, and Tesla has suffered as a result of Musk’s outspoken antics. Undoubtedly, Musk is a pioneer and his various businesses have the potential to have a huge impact on the world, as long as he can learn to separate his private and public personas.

Another winner for Amazon, as they became the second company to be worth more than $1 trillion this year. Amazon Go alone is predicted to be a $4.5 billion business by 2021; incredible for a company still in its infancy. Amazon have managed to avoid a few hits to their reputation this year, thanks to their outstanding products and services and use of innovation and this is only set to continue in 2019.

We have to give a special mention to Facebook here, who despite seemingly being on the up again, suffered a 20% loss in stock value overnight back in July. Ultimately though, we had to give the prize to Apple, who became the first business valued at more than $1 trillion in August, only to see their value drop by $450 billion in the last few months. For perspective, that’s more than the market cap for Facebook in its entirety. The slowdown has been blamed on lack of innovation on the part of Apple, with consumers noting little difference between 2017’s iPhone X and 2018’s iPhone XS. Let’s hope that, whatever the name of the next iPhone, it has plenty of new technology.