Sophia, Erica and the Robot Revolution 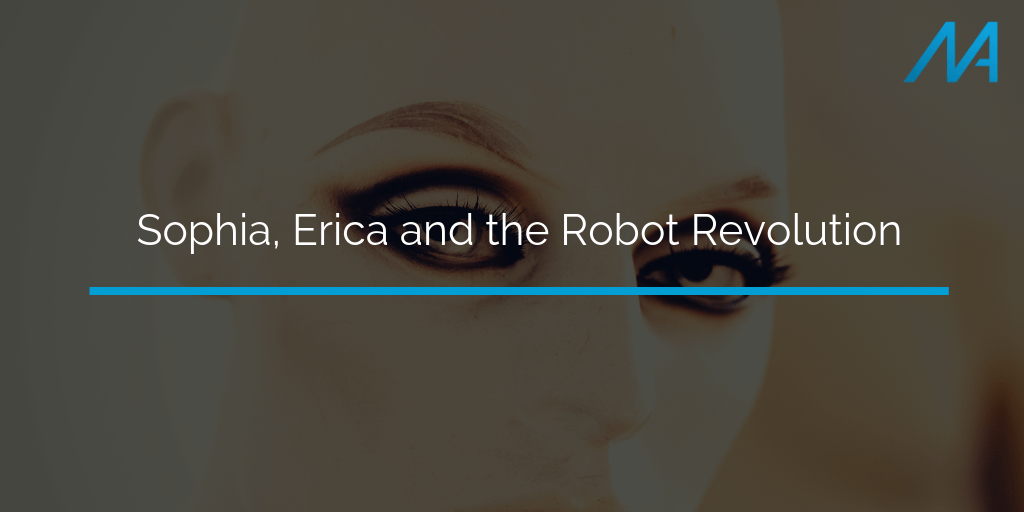 Sophia, Erica and the Robot Revolution

Since Jules Verne's "The Steam House" in 1880, where a group of British colonialists travelled to India in a house pulled by a mechanical elephant powered by steam, the world has been fascinated by robots. Just recently (relatively speaking at least) we saw the first actual robot come into play - in 1954 with the Unimate robot - which was then sold to General Motors to lift and stack hot metal from a die casting machine.

One need only look at the glut of popular media available to show just how taken the human psyche is with the idea of humanoid robots - true, verifiable artificial intelligence ... and not just what those phone salesmen at MWC are selling.

From iRobot and Futurama, to Westworld, The Jetsons, and Kryten in Red Dward... there's no doubt that science fiction writers have played a role in the rise of actual robotics - acting as the dreamers behind the technology that others have created.

Speaking of the creation of Sophia, the realistic robot that has garnered worldwide attention, David Hanson, founder of Hanson Robotics, confirmed: "we are building the AI architecture for genuine love."

The Hanson Robotics team has now progressed to the second round of the Watson AI XPrize, designed to accelerate AI adoption technologies, although critics, most notably Facebook's Chief AI Scientist, have accused the company of promoting a "Wizard-of-Oz AI", comparing its abilities to a particularly high-tech puppet.

So, what does this mean for businesses?

For one Japanese news-station at the very least, it's resulted in Erica, another AI-based robot, being prepared to take on the role of news anchor - making her debut in April. According to Hanson, the creator of Sophia, "some of what she says is actually written by writers."

The Sophia robot is designed with cameras in the eyes, and a 3D sensor in the chest which helps the entity to 'see'. The processor of Sophia, in practice, combined facial and speech recognition to develop lifelike, albeit scripted, responses. Indeed, the robot is the first to have gained citizenship in Saudi Arabia in an attempt to promote the country as a hub for artificial intelligence development.

Today, it's clear that no matter how advanced robotics have become, they have similar issues to actual AI technology - scripted responses to known variables. For us to see true intelligent robots, we will need to see two things - firstly, the increased capabilities of the actual hardware storing this intelligence, i.e, the robots themselves. Secondly, we will need to see the development of an AI software similar in capacity to that seen in the human brain.

With a projected market revenue increase for service robotics increasing from $3.7bn in 2015 to $15bn in 2020, according to IHS Markit, there's a clear demand (at least from investors) to see robots take their place alongside human workers.

Currently, while AI performs markedly more efficiently than the human brain in terms of sheer processing power, it cannot yet compete in terms of creativity. The result is a huge power and infrastructure investment required to perform at a fraction of the capacity seen in people - resulting in the need for room-sized computers for any level of success.

Despite once claiming a desire to "destroy humans", the culmination of the collective robotic dream is still a way off. As the great Dr. Ellie Sattler once said, we'll be fine... "unless they figure out how to opens doors".