SAP in Germany – driving innovation in the European ERP market? 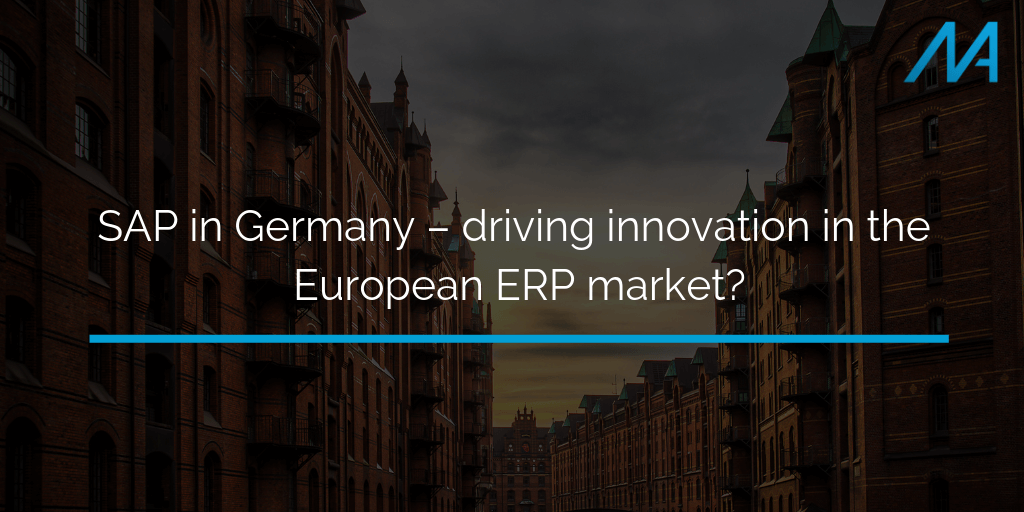 Enterprise Resource Planning (ERP) technology has taken the world by storm. ERP originated as an extension of MRP (Manufacturing Resource Planning) and CIM, (Computer Integrated Manufacturing). In short, to be classified as an ERP system, the package itself must provide an amalgamation of at least two systems.

Among the most significant vendors in this field currently are Salesforce, Oracle, Infor, and SAP. With its major base of operations set in Germany, SAP has provided a clear advantage to the German, and by extension, European marketplaces.

Brought to life in 1973 with its initial offering, SAP R/98, the company has grown parallel to the boom in the ERP market. Indeed, in 2015, SAP launched its newest offering – SAP S/4HANA. This included compatibility for each business requirement – cloud, on premise and hybrid.

With each of its major competitors based in the US, this has led to something of a market gap within European nations. SAP has capitalised on this greatly. By 1998, researchers noted that, within European SMEs, ERP adoption sat at 27% across either one, or a number of more functional areas. This figure was accordingly attributed to a culture of innovation – with Scandinavian nations and The Netherlands characterised by “a strong desire for novelty and variety” – one which SAP have cultivated and worked to improve ever since.

In 2014, MarketWatch noted a prediction – an annual CAGR (Compound Annual Growth Rate) of more than 6% between 2013 and 2018 for Cloud ERP. In 2017, these figures were revised. Instead, figures now show a 10% CAGR between 2016 and 2021. In Germany, for example, 100% of firms surveyed in real estate were utilising some form of ERP technology. 98% of Manufacturing and Construction organisations, 96% of those businesses within the energy sector, and even 95% of automotive industries used the software.

The future for ERP systems now clearly lies within the networked, cloud based solutions brought about by Software-as-a-Service (SaaS) and the Internet of Things (IoT). Indeed, the adoption of cloud technology has far outstripped estimates – even from Gartner, which predicted 47% of organisations planned to move their core ERP systems to the cloud in five years. More recent figures have noted the highest levels of cloud ERP adoption to date, with on-premise securing 56%, SaaS (Software-as-a-Service) claiming 17 per cent, and cloud based ERP set at 27%.

The ERP market is, again, changing with the times. For SAP in particular, the next step to bolster its monopoly in European marketplaces sits within the realms of Software-as-a-Service and AI offerings. Indeed, with the launch of its S/4HANA and SAP Leonardo platforms, SAP has positioned itself well to take advantage of future marketplace trends. This comes in addition to its aggressive acquisition list, featuring Gigya, the customer profile and identity management company, and Altiscale – a start-up looking at big data applications.

For IT integrators, this necessitates a myriad of new skills and specialisms to stay ahead of the competition. With its series of acquisitions, continual investment in R&D, and longevity within a market characterised by short company lifespans, SAP is the natural choice for specialists looking to expand their careers. In short, the company is building upon what already exists – a strong culture of collaboration and innovation. Within European countries in particular, one thing is clear - SAP is leading the marketplace.