Migration of tech talent across Europe and the opportunities for recruiters 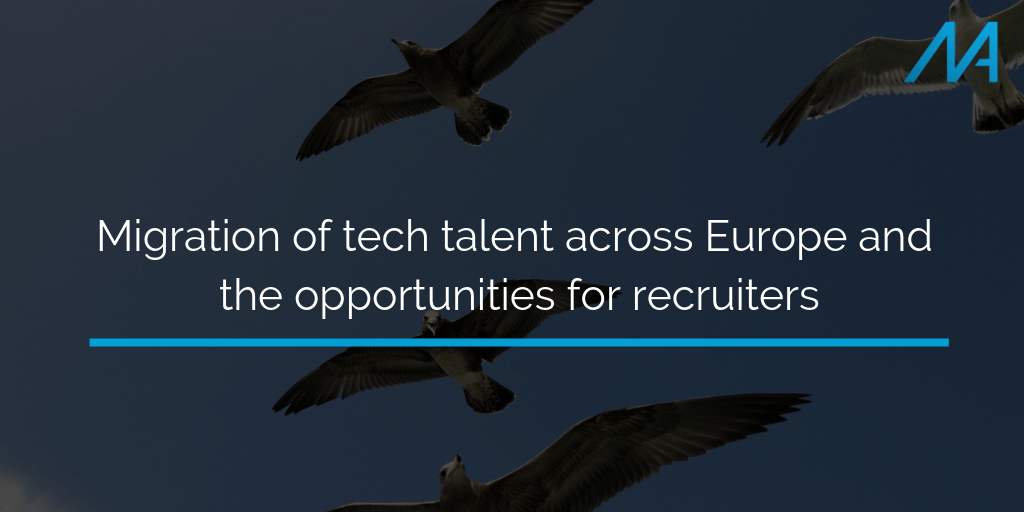 The global technology market is shifting rapidly as high-tech advances continue. Nowhere is this exhibited more than in the original home of the earliest tech pioneers, Silicon Valley. But while ‘the Valley’ is in no imminent danger of losing its crown as the world’s leading tech hub anytime soon, Europe’s tech scene is hot on its heels and rapidly diverting both investment and talent away from the Californian region.

One reason for this is – rather ironically – the lack of connectivity in the region. Indeed, Silicon Valley is reportedly struggling to attract talent due to its poor infrastructure, long commutes and the soaring cost of living and housing.

As a consequence, since 2015, there has been a rise in tech talent moving further afield as the Internet of Things, smart factories and favourable market opportunities mean a business can now be distributed across multiple countries – with no loss in productivity. And it’s Europe that is proving to be the magnet attracting these businesses and the talent that is needed to power them.

The top tech hubs across Europe now sit firmly with Paris, Berlin and London. With such a robust standing from modern technological innovators, what we see is a comparable increase to the number of technology roles available. So the question is – why is the European market for technology roles increasing, and how can recruiters take advantage of this shift?

This market opportunity can be attributed to a number of key factors. Despite highly educated staff, lower costs per hire, easier expansion and favourable business conditions the real reason is a simple one: cost. Where previously innovators would flock to Silicon Valley, the dot-com boom is still fresh in the collective industry memory. As valuations and footprints of organisations rise exponentially, so too do the associated costs.

Snapchat, for instance is now valued at $28bn despite not yet turning a profit. In March this year, Airbnb was valued at $31bn, while Uber’s $50bn valuation which it received in April may rise or fall, depending on how the latest crisis pans out. At the same time, Instagram was valued at $50bn, while the behemoth of all tech platforms, Facebook, is estimated to be worth a staggering $435bn. In fact, Facebook pays their employees with fewer than five years’ experience an average salary of $116,800 per year.

But while these figures are certainly impressive and remind us of why Silicon Valley has ruled the tech roost for so long, Europe has a far greater allure: profitability.

Contrary to the bubble economy we see in Silicon Valley, the European market represents stability as demonstrated by the increased levels of venture capital pouring into the region due to the consistency of the market, and the availability of top talent to support long-term growth. Not to mention the significant investment being made by governments too, particularly in Germany and France.

Taking the latter as a case in point, the French tech scene is without question the most exciting and fast-growing of all the European tech hubs. Home to an eclectic mix of multinationals and telco giants and a start-up ecosystem that is being driven by no other than French President Emmanuel Macron, France’s whispering in the ear of Silicon Valley is getting louder and louder.

Indeed, while the likes of Atos, Daily Motion and Deezer have served as the proverbial hooks to attract investment initially, it is the emergence of start-up like Crieto and BlaBlaCar – the so-called darlings of the French tech scene – that are getting investors licking their lips and willing to pump money into those businesses that could be the next big thing. It is this start-up scene that is really putting France on the tech map and – unsurprisingly – Paris is leading the way, thanks to one very big name.

Station F, which opened earlier this summer, is the world’s largest tech start-up campus – 34,000 square meters and more than 3,000 desks that are home to 1,100 start-ups and tech talent not just from France but around the world. When President Macron officially opened the ‘campus’ in July, he said: ““Many people wanted to tell me what kind of life I should lead, and I decided something else. You don’t want someone else to lead your life for you.” It is that spirit of doing things different (reminiscent of Google’s mantra, Do great things) that the French government, under Macron, is trying to evoke.

In 2016, tech companies in France raised more than $2bn in VC funding. However, not to be outdone by its western neighbour, Germany’s position as one of the leading tech players in Europe and second only to the UK seems assured. Last year, German tech companies raised $2.2bn in VC funding with Berlin in particular looking to benefit from Britain’s Brexit uncertainty.

Unashamedly mirroring itself on London’s tech start-up scene, Berlin bills itself as ‘a place where you can make things happen without having a lot of money in your pocket.’ Despite sharp increases in rental rates in recent years, they remain significantly lower than elsewhere in Europe. Some estimates suggest that office and property rentals in Berlin are approximately half the figure you could expect to pay in London for a similar property in a an equally desirable location. This is having a major impact on Berlin’s attractive as a city of choice for top tech talent.

According to recent figures, around 34% of Berlin’s tech workforce comes from elsewhere in Germany and increasingly from overseas, particularly France, Spain, the US and of course the UK. This is being helped by the country’s relatively relaxed visa-application process, which Bloomberg suggests, “gives Germany an edge in attracting international talent, such as software engineers.”

London continues to hold the number one spot when it comes to talent and investment attraction. Last year, over $6.7bn in investment was raised by tech companies in the UK but it would be wrong to assume that Europe’s tech scene is exclusive to London, Berlin and Paris. Dublin, Stockholm, Helsinki, Prague, Amsterdam and Barcelona are key emerging communities that have been enjoying success on a global stage too in recent years.

Stockholm, for instance, is home to such companies as Skype, Spotify, Klarna, Mojang (Minecraft) and King (of Candy Crush fame), while neighbours Helskinki have brought us the likes of Rovio (of Angry Birds fame) and Supercell (Clash of Clans). Each of these cities is a hotbed of tech activity and provides access to a pool of highly talent staff.

Eurostat has now confirmed that 234.2 million people were in work across the EU this year – a rise of 1.4 per cent on the year prior. With an ample pool of tech talent at an attractive price, investors increasingly view European markets as areas in which their valuable capital can not only be invested, but also returned with interest.

In 2016, European tech companies successfully raised €8.8bn in venture capital – a 12% increase on the previous year. In line with this strategy, the EU has also now agreed to new rules to effectively increase access to VC funding for SMBs. This move is designed to further promote jobs and growth – providing a boost to an already burgeoning market, and a welcome market expansion opportunity for IT recruiters.

The expansion of the European market presents a significant opportunity for recruiters across the IT landscape. As organisations start up or move to the EU to grow their business, a rising requirement for skilled talent is the natural conclusion.

Further to this, the generation of demand leads to a knock-on increase in the requirement for skilled IT talent across the supply chain – ranging from communications and IT support to coding expertise.

In the next decade the true challenge for recruiters will not be finding roles to place candidates in, but sourcing the volume of talent required to feed the coming market boom. The differentiator between successful and non-successful recruiters will be how they adapt to this new market.