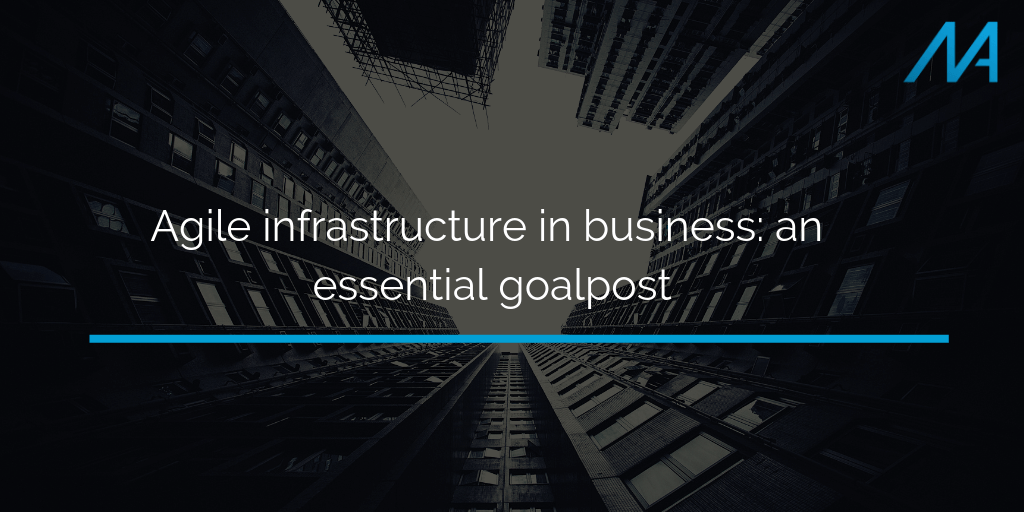 Agility in business today, it’s a catchphrase as common as breaking down siloes was in days of yore. Put in simple terms, business agility is defined as the ability to be flexible – rapidly changing in response to both market and environmental shifts. Historically, however, the agile movement has been limited to culture and software development cycles – hiring the right people with the right skills to effectively manage any significant change and bringing the development and operations teams closer together.

With the rise of DevOps, this has become more all-encompassing – bleeding over towards the actual infrastructure within specific businesses… but adoption has been a difficult process to initiate. Whilst DevOps was indeed originally developed to reduce software release cycles, the lessons that are preached – agility, collaboration and leadership – are easily extended to non-software enterprises.

But how does this pivot towards agile infrastructure manifest in business today?

According to Matt Hicks, Senior Vice President at Red Hat, the DevOps and technology consultancy firm, advised that “Doing DevOps in a small group or start-up and doing it at scale are two very different things … This path has been so hard, in fact, that it has been easy for IT leaders to put off agile methodology for another year.”

But as the day to day requirements of business continues to shift, and the infrastructure behind the DevOps revolution becomes more agile itself, we see something interesting happening. Hicks continued, stating that: “The operations team keeps infrastructure secure and reliable … [and is] responsible for all the pulleys and levers that make up your infrastructure, whether on-premises or in the cloud.”

With exponentially increasing connectivity across the world, most apparent with the arrival of high speed internet, Infrastructure-as-a-Service has become a far more feasible proposition. As DevOps and Cloud Computing has now officially hit the mainstream, we also see a huge number of tools available to facilitate the drive towards agility. Jenkins, Github and gulp.js are each DevOps optimisation tools which are directly accessible by smaller businesses – something of a starting point into developing their local infrastructure further.

Flexible, agile infrastructure undoubtedly has a huge impact on the way that businesses are run. An advantage of this significant shift to decentralised, serverless, infrastructure is firstly one of structure. A greenfield infrastructure project is, naturally, far more cost effective (and easier to implement) than brownfield. Shifting away from localised servers means a vast reduction in the investment to maintenance and upkeep, for example, with a more limited requirement in terms of upgrading.

Hank Marquis, Research Director at Gartner confirmed that: “The majority of I&O (infrastructure and operations) leaders are in organisations that are still structured around traditional technology domains/silos that don’t adequately support newer requirements such as bimodal IT, digital business and digital business platforms … they are struggling to optimise [their] IT operations.”

The issue then comes from what comes next. From a place of boundless potential, with cloud-based services such as AWS and Azure, there is an associated level of lock-in. Once systems are designed around a particular platform, the amount of cross-activity that can actually be undertaken is severely curtailed. Putting these constraints on companies that are looking for agility in their infrastructure does indeed seem like a counterproductive move, but whether it is a necessity remains to be seen.

Through shifting towards more agile infrastructure – invariably serverless or ccloud-based organisations stand to benefit not just in terms of cost, but reduced maintenance requirements and increased speed to market of any projects they have in the pipeline. Despite the challenging restraints that businesses are currently facing, there really has never been a better time to focus on improving the agility of your business.