The rise and rise of market giants; what’s the next step in the Cloud War? 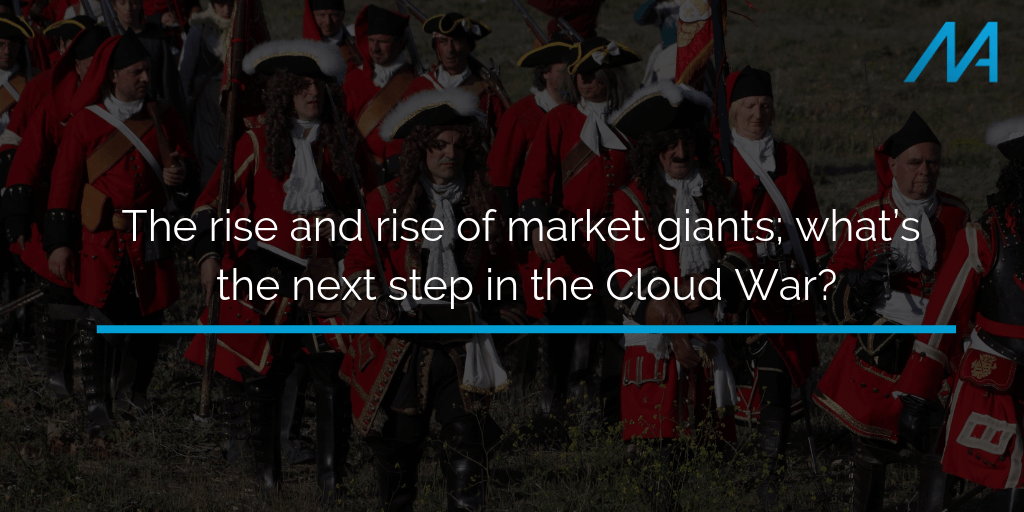 Cloud – it’s a topic at the forefront of the modern technological boom. Providing much needed flexibility in terms of infrastructure, businesses can effectively scale up their capacity almost instantaneously. Better yet, staff can work from anywhere with an internet connection, software is updated automatically, and in the event of a disaster, all information is stored off-site.

The key term here is agility – being able to instantly scale a business with no drop in uptime and to easily work from any location is a hugely understated value of cloud technology.

It’s no surprise then, that the major players in the market are on the defensive. Today we see a far larger market of suppliers on the cloud looking to edge in to the once robust monopolies.

With Amazon claiming an overall market value of $260.2bn in 2017, up by 18.5%, it’s no surprise that the battle for the remaining 38% market share is heating up. Currently trailing behind AWS, we see the usual suspects – the remainder of the aforementioned ‘giants’… but between the gaps, new contenders are emerging.

Indeed, whilst the early focus on cloud-based Infrastrucuture-as-a-Service (IaaS) has favoured the Four Giants, the next battleground will focus entirely on the software that can be provided as an end result – the implementation of Artificial Intelligence (AI), Machine Learning (ML) and Blockchain.

According to recent research from PwC, the Software-as-a-Service (SaaS) model is fast approaching 10% of total revenue for the top 50 software companies, highlighting the staggering demand for cloud-based services.

SAP, for example, is one of the major companies to take a slice of Amazon’s cloud-pie. Leveraging its existing business releationships through its HANA offering, and working within the AWS framework throught their partnership programme, the industry giant looks set to monopolise on the increasing demand for services… provided they bend the metaphorical knee to Amazon, of course.

Outliers such as ServiceNow and Workday, with 40% and 41% revenue increases respectively recorded… in part due to their significant focus on the software aspect of cloud computing, complimenting the infrastructure angle favoured by its larger competitors.

There’s no question that Amazon’s AWS, with Alphabet, IBM and Microsoft in tow, are dominating the cloud landscape today. Notably, what Amazon has done is to create a lock-in monopoly. Combined with its, frankly, massive market share, the cloud giant now sets the pace and requirements for smaller challenger companies that come after it.

It would appear that the early stages of the Cloud Wars has been won by Amazon. The next stage will be organisations that are looking at software models to build on prexisting IaaS models.